Synoptic of the transmission line

This is the basic principle of transmission on the uplink to the satellite, in SDR transmission. In this article we will discuss all the stages that make up the transmission line, and especially the transmission and amplification part: the transmitter is no more constituted by a “classical” conversion and analog technology but by a SDR (Software Defined Radio) technology emitter. To get a technical understanding of SDR, I suggest you watch the video presentation (in french) of a SDR conference by Sylvain F4GKR and available on the REF-Info channel. 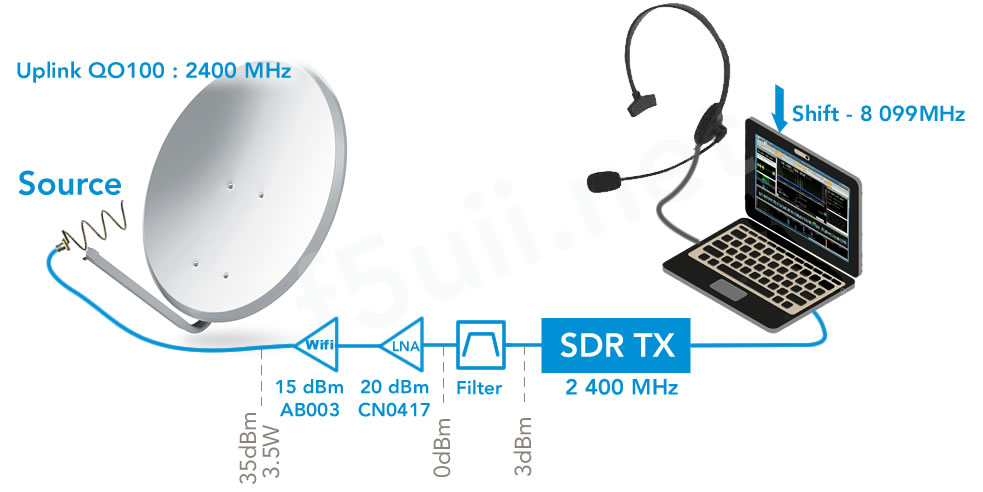 This synoptic is composed of three main parts (from left to right):

Several possibilities are available to you in regards to antennas: 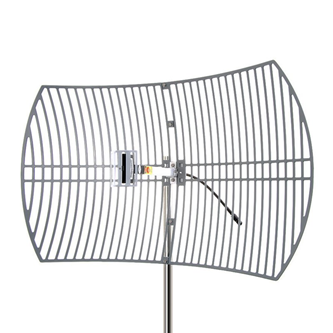 For DIYers, these antennas can be made by themselves. However, the antenna setting remains impassible for an acceptable return loss of the antenna on 2400 MHz, which is a very effective reason to preserve your amplifiers. To do this, cheap vector analyzers now exist at asian resellers.

Vector Signal Analyzer for your antennas 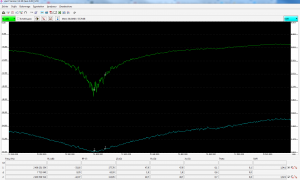 Here again, if you make your own antennas for transmission on 2400 MHz, you will have to check the adaptation of your antenna. This may be of interest for a possible verification and adjustment of an antenna, even if purchased and pre-set. The DJ7GP antenna has an adjustment screw, which can be adjusted when the antenna has taken its final position in the focus of your dish.

Before even presenting the equipment that will be part of the amplification line, let’s see together what is needed in the terms of power.

Since the satellite is very sensitive, and the band noise is stable, without variation, a station with 100 mW can be heard and decoded in SSB with this station.

CW signal (tune) at 5W with 1.2m dish, to the right of the lower beacon

Above, here is a recording of a transmission run with 500mW, in SSB.

The following table shows you how the gain on 2400 MHz of parabolas of different sizes evolves. Each time the diameter is doubled, the gain is +6dB, i.e. an equivalent power multiplied by four (This is the case between a parabola of 0.60m and 1.20m, there is 6 dBm). Another reference point. Each time 12.24% is added to the diameter, the gain is +1 dBm (or +25% of power gained).